GERRY DEE - ALONE. ON A STAGE. 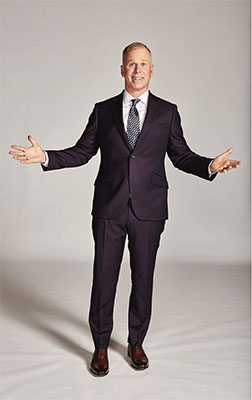 NOTE: Effective September 1, 2021, and until further notice, all patrons are required to wear a mask and provide proof of full vaccination in order to enter the Regent Theatre. Click here for more information.

Host of Family Feud Canada and star of award-winning sitcom, Mr D, Gerry Dee has been making audiences laugh for two decades and is back on the road with his latest cross-Canada tour – Alone. On A Stage. Dee will take his trademark humour about marriage, fatherhood, and his years as a teacher to cities across Ontario.

“I’m so excited to get back out on the road and bring people some of my newer material,” said Dee.

Recommended Age: 16+
Age Restriction: 12+
Though most familiar as the star, co-creator, and one of the principle writers for CBC's hit sitcom Mr. D, it is in stand-up comedy where Gerry Dee first hit his mark. Dee, who was a private school teacher for nine years before giving it up for comedy, became the first Canadian in 27 years to win the prestigious San Francisco International Comedy Competition, and was a finalist on NBC’s Last Comic Standing, the highest finish by a Canadian in the history of the show.