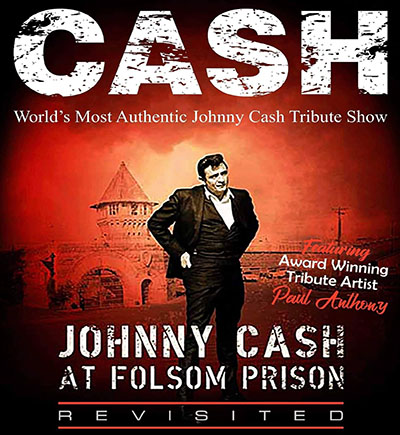 We all have either grown up listening to Johnny’s music in our parents’ home, experienced a Johnny Cash television show, Johnny Cash movie or a live performance somewhere in the world.

Every effort has been taken to re-create the sounds of Johnny Cash. From the Guitar playing sound of Luther Perkins, The Stand Up Bass sound of Marshall Grant, The Drumming sound of ‘Fluke’ Holland and the vocal sound of ‘The Man In Black’ Johnny Cash.

Recommended Age:  14+
Age Restriction:  12+
The World’s Only Johnny Cash Tribute Artist invited by John Carter Cash to record an album ‘The Nashville Connection’ at Cash Cabin along with Johnny Cash’s musicians, Johnny’s one and only drummer, WS Fluke Holland, John’s bass player Dave Roe, Guitar player Kenny Vaughan, Chris Scruggs and Grammy Winning Producer Chuck Turner at Cash Cabin As well as record an acoustic version of John’s final release Hurt from the chair in the Hurt video Filmed in Johnny Cash’s farmhouse living room in Bon Aqua Tennessee on 9/11/16 Paul continues to work closely with WS Holland and John’s youngest daughter, Tara Cash, to maintain the accuracy and authenticity of his tribute to the Man In Black, Johnny Cash.