SKINNAMARINK with SHARON, RANDI and FRIENDS 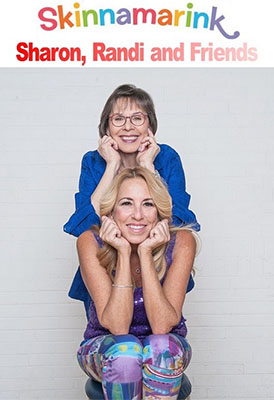 For more than forty years, Sharon Hampson, a member of Canada's much loved trio of family entertainers Sharon, Lois & Bram, has entertained families across North America. When Lois stepped away from performing in 2000, Sharon & Bram carried on as a duo. Through their touring, their gold, platinum and multi-platinum recordings, their critically acclaimed television series The Elephant Show and Skinnamarink TV, they have sung their way into the hearts and homes of young and old alike.

Following Bram’s retirement and with his encouragement, Sharon, along with her daughter Randi are continuing to share the music of Sharon, Lois and Bram with fans and friends, old and new.

Sharon and her daughter, Randi, have been singing together since Randi was three. When Lois was unable to make a holiday concert performance, she suggested Randi to take her place. Randi accepted the opportunity and performed on stage, alongside her mother. Randi is the co-author of Sharon, Lois & Bram’s Skinnamarink and the Producer of Sharon & Bram’s recently released and Juno Nominated recording, Sharon & Bram and Friends. Randi’s song lyrics and voice can be heard on several of the album''s tracks and fans had the chance to see her performing live, countless times throughout Sharon & Bram’s 2019 tour. Sharon and Randi are excited to be singing the songs of Sharon, Lois & Bram (many introduced to the trio by Randi), with a new generation of musical friends.

Recommended Age:  All Ages * Everyone requires a ticket including "Babes In Arms"
Come say hello to Sharon and Randi after the show for a picture, hug or have them sign a copy of your Book or favourite CD/DVD/LP.

A Sharon and Randi show is a sing-along concert for the entire family, featuring such well-loved favourites as “She’ll Be Coming ‘Round the Mountain", “Five Little Monkeys", “One Elephant", “Tingalayo", and, of course, “Skinnamarink" as well as exciting new songs released this past year.

Over the years, Sharon, Lois and Bram, have supported many social welfare programmes in Canada and the US, such as school breakfasts for learning, encouraging parents to inoculate their children and, internationally, as Goodwill Ambassadors for UNICEF in North and South America, for which they received the Danny Kaye Humanitarian Award.  For their years of work providing the best in participatory music for children and their families, Sharon, Lois and Bram have been inducted into The Order of Canada, the highest honour in the country.