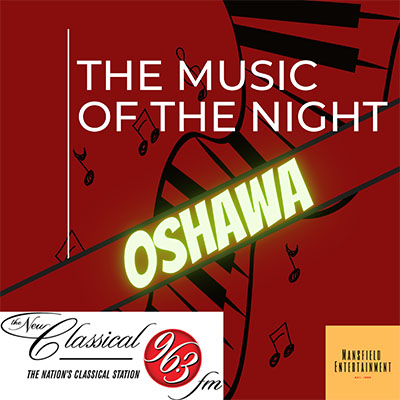 Presented by:  Mansfield Entertainment in Association with Silly Stages

For over half a century, Andrew Lloyd Webber's music have dazzled audiences. He has composed 13 musicals, a song cycle, a set of variations, two film scores, and a Latin Requiem Mass. Several of his songs have been widely recorded and were hits outside of their parent musicals, notably "The Music of the Night" and "All I Ask of You" from The Phantom of the Opera, "I Don't Know How to Love Him" from Jesus Christ Superstar, "Don't Cry for Me, Argentina" from Evita, "Any Dream Will Do" from Joseph and the Amazing Technicolor Dreamcoat and "Memory" from Cats.

In celebration of The Lord Lloyd-Webber's music, Zac Mansfield has put together a new and improved revue show featuring all of your favourite songs....plus obscure gems from Andrew's lesser-known shows. This touring version replicates what the sold-out crowds in Oshawa fell in love with so much. It returns home to join the celebration of the performing arts again in a post-COVID world!

Original cast members Mathew Edmondson and Amanda Bradley are joined by vocalists Taylor Rodkin and Laura Murphy. This delightful show is again accompanied on piano by Miguel Esteban, and narrated by Joan Mansfield.

In 2001 The New York Times referred to Sir Andrew Lloyd Webber as "the most commercially successful composer in history". Ranked the "fifth most powerful person in British culture" by The Daily Telegraph in 2008, the lyricist Don Black stated "Andrew more or less single-handedly reinvented the musical."