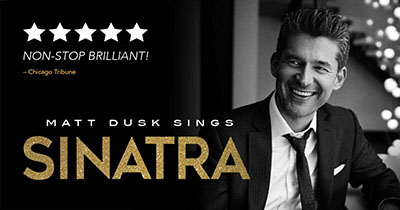 Sinatra. All that cool, classy style and energy from the Rat Pack shows of yesterday are right here, right now. Take a journey with Award-Winning, Multi-Platinum selling crooner Matt Dusk as he whisks you away to Las Vegas in 1966 where he pays homage to his hero Frank Sinatra.

With new arrangements by Grammy Award-winning arrangers Pat Williams and Sammy Nestico, Dusk transports you back in time to one of music’s most elegant eras.  A time when Come Fly With Me, I’ve Got You Under My Skin, Fly Me To The Moon and One For My Baby dominated the charts.

Recommended Age:  14+
Age Restriction:  7+
Crooners like Toronto’s Matt Dusk has taken what he has learned from the greats and molded it for a modern audience. – LA Times

Blending distinctly Sinatra-esque swagger, Dusk is waist deep in grandiose arrangements that are dripping with Sin City excess and turns the clock back some four decades with excellence – Jazz Times