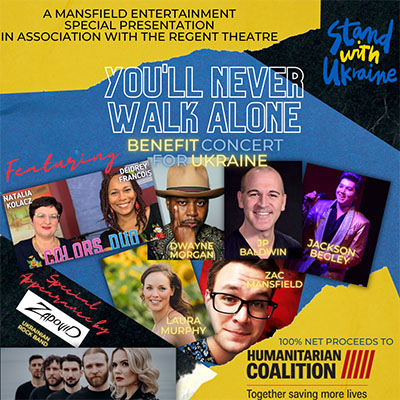 **This event was rescheduled.  Ticketholders have been notified.**

Presented by: Mansfield Entertainment in Association with Regent Theatre

Mansfield Entertainment Canada was overcome with collective sadness and shock, and helplessness, when witnessing the news unfold in February of Putin's unjustified, inhumane invasion of Ukraine.

In response to this humanitarian crisis, as Ukrainians seek shelter, medical assistance, and emergency supplies, Mansfield Entertainment Canada has brought together some of our finest local musicians and performers - ALL DONATING THEIR TIME AND TALENT - to present a benefit concert to support the Humanitarian Coalition's (humanitariancoalition.ca) response in Ukraine.

100% of ticket sale proceeds will go to the Humanitarian Coalition's Ukraine Response charity.

Tickets are Pay-What-You-Can-Afford:  $25, $50, $75, $100, $125, or $150 per ticket (exclusive of fees). You can mix-and-match ticket levels for your order as well, to maximize what you are able and willing to give to the cause, and to help keep the event accessible for everyone to support Ukraine. Please note that we are not able to issue tax receipts. If you would like to donate more directly to the charity, please visit their website.

In the first hour of the show, be inspired by powerful poetry performances, and be entertained with the best of Broadway and contemporary music, featuring LOCAL performers from the Mansfield Entertainment Canada roster - including Laura Murphy, Mathew Edmondson, and more.

Poet Dwayne Morgan will be performing in the first set. Dwayne Morgan is a two-time Canadian National Poetry Slam Champion. He began his career as a spoken word artist in 1993.  In 1994, he founded Up From The Roots entertainment, to promote the positive artistic contributions of African Canadian and urban influenced artists.  Morgan is a 2021 finalist for the Toronto Arts Foundation Margo Bindhart and Rita Davies Award for Cultural Leadership, the 2018 winner of the Sheri-D Wilson Golden Beret Award for Career Achievement in the Spoken Word, a 2016 finalist for the Premier’s Award for Excellence in the Arts, and in 2013, Morgan was inducted into the Scarborough Walk of Fame. Morgan has received both the African Canadian Achievement Award, and the Harry Jerome Award for Excellence in the Arts. Dwayne has performed for the former President of the United States, Barack Obama, the former Governor General of Canada, Michaelle Jean, the late leader of the NDP, Jack Layton, and has shared the stage with many of Canada’s top artists including Russell Peters while opening for international artists Alicia Keys, and recording with Canadian artists, including Drake.


More performers to be announced!