ISN'T HE LOVELY - THE MUSIC OF STEVIE WONDER 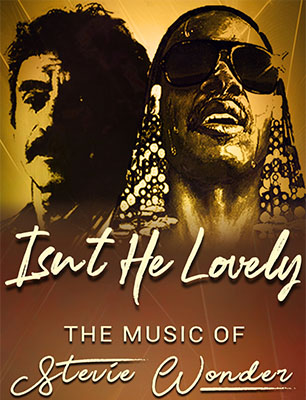 Presented by:  Ripe Boy Productions in Association with Tony Nolasco

A Celebration of the music of the iconic Stevie Wonder, performed by Tony Nolasco and a ten piece band consisting of some of Canada's finest musicians and singers.

Stevie Wonder, who signed his first contract with Motown Records at 11 years old, gained a lifelong fan the following year when they both turned 12. That fan, who went on to make his own music through the intervening years is Tony Nolasco. Tony credits Stevie Wonder’s singing with his own passion. In his words, “I was smitten!”.

Taking inspiration from some words from Luther Vandross to Tony years ago “It’s all about the tone” In other words someone can have great vocal power, maybe a 4 or 5 octave range but if that doesn’t translate to an attractive tone then listening to them sing isn’t appealing. Terrific advice from a master, that Tony took to heart. The fact is, Tony Nolasco does have the tone!

Recommended Age:  14+
Age Restriction:  12+
Tony began singing in the shower and ‘banging on the drums’. In his mid-teens Tony moved down to Yorkville Village and there his musical journey began as drummer for the hugely successful homegrown blues band, McKenna Mendelson Mainline who shared the bill with such stars as Jimi Hendrix, Rod Stewart, Jeff Beck and John Lee Hooker. During those heady days in Yorkville Tony formed a close friendship with ‘a colourful fellow’ - James Ambrose Johnson - better known as Rick James. Tony developed the path for Mr. James that would lead him to Motown and on to global success. The two musicians embarked on a project, The Mary Jane Girls, several years later that eventually became an international hit.

Coming to the present day, after attending a gospel workshop at York University in Toronto, and singing as a guest at a gospel church locally - the drums are now retired and Tony Nolasco picked up the microphone - he knows he’ll never put it down again.