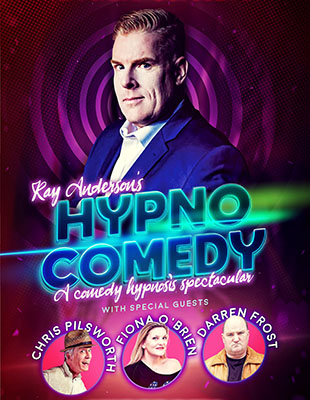 Ray Anderson brings some of Canada's top comics to create the mood of fun, before he steps on stage for his laugh out loud adult Hypnosis show.

The Event starts with some hard hitting comedy will have you laughing till you hurt, featuring Ray's comedy friends Darren Frost, Chris Pilsworth and Fiona O'Brien. This is followed by Ray Anderson's popular hypnosis show, where you and your friends are the main attraction.

The last two years have been hard on everyone, so Ray has kept his ticket prices low. This is a popular event, so don't miss out!

Darren Frost - Darren has been awarded the prestigious Kari award for Best Performance in a Commercial in Canada, and twice awarded top ten comedy moments of the year by Toronto Entertainment Magazine. He has also performed in various comedy festivals including Just For Laughs, Winnipeg Comedy Festival, and LOL Sudbury.

Chris Pilsworth - Is the Gentleman's magician, he is kind, funny and will knock your socks off with what he does.

Fiona O'Brien - After migrating from Ireland to Canada, began a quest to stamp out the racism that the Irish face, one lucky charm at a time.

Each comic will give about 15 minutes of their best material, then Ray Anderson will bring members of the audience up on stage, where they become the main attraction! Ray brings their imaginations to life, as he uses the art of hypnosis to transport them on a journey that you will have to see to believe.